Too say big thank you too all the people how have donated money too me in my money problems while trying to live in Denmark. I have dedicated to write a ebook about Eyjafjallajökull volcano eruption in the year 2010. It is not going to be a scientific book. But rather a book on how I did view the eruption, along with some scientific data if I can get them into the book. Among other stuff about Eyjafjallajökull volcano.

I have all the emails from the people how have donated to me. So if you want the ebook when the time come. All that has too be done is to drop me a email too get the ebook.

I am not sure when the ebook comes out. As it takes a bit of a time for me to write it. But I am going to announce it when the ebook is ready and published. I plan to start writing it when I have finished writing a sci-fi ebook that I have already started on.

In the evening news in Rúv they tell about research (based on models) that suggest that it is going to be less chance of large airspace disruption like took place in Eyjafjallajökull volcano eruption in the year 2010. Reason for that is the fact that volcano ash from Katla volcano is normally not as small (less then 1 micron in size) as the volcano ash from Eyjafjallajökull volcano. But this small size of the early ash cloud allowed it too travel longer and hang up longer in the air then from more common ash clouds.

The reason for this is because of the fact that lava from Katla volcano are mostly basaltic and would create Hawaiian eruption if no glacier was on top of Katla volcano. Ash cloud from Surtseyan eruption is more heavy, as the volcano ash particles are larger and more heavy.

This might be a good news for the air travel industry in Europe when Katla volcano starts erupting. But this might create issues for the area closest to Iceland anyway. Depending on wind direction.

The Rúv news about this. Use Google translate at own risk.

News in english about this. Thanks to Erik Klemetti how did point this out.

Almannavarnir in Iceland did send out this warning earlier tonight. There is a heavy rain going over south of Iceland. This means that there is a risk of ash floods from south side of Eyjafjallajökull volcano. As that area is still covered in heavy ash after the last year eruption. People traveling in this area is advised to monitor the news or the website vegagerdin.is and vedur.is for more information. The area in the most risk of flooding is Þórsmörk and other rivers that come from Eyjafjallajökull volcano. The most heavy rain is forecast to start from 22:00 UTC and last until 12:00 UTC on 22 April 2011. But this forecast can change without any warning at all. So it is important to monitor the weather forecast for changes.

News about this in Icelandic. Use Google translate if you want to solve a puzzle.

The eruption up to this day had just been Hawaiian type eruption with slow moving lavas and with little to no volcano ash at all. The second phase of the eruption in Eyjafjallajökull volcano was mostly of Strombolian type of eruption. With little to heavy ash fall. But in the early start of the eruption and specially when a water got into the crater the ash fall was heavy. The volcano ash cloud did at it’s highest peak go up to 10 km high.

Other things that where seen in this eruption in Eyjafjallajökull volcano was a smoke ring, something really rare and most often found in Etna volcano in Italy. But shock waves where also seen and heard across Iceland during this eruption. But it was also recorded when the eruption was throwing up large rocks from the main crater. Some people also made really cool videos of the eruption. Here is one of it.

Among the many things that did happen was the fact that a lava did flow into the glacier and destroy the glacier in the process. This happening in a eruption in Iceland had not been recorded or observed until the eruption in Eyjafjallajökull volcano in the year 2010.

Picture of the Eyjafjallajökull volcano smoke ring. Picture captured from Vodafone IS web cam that was observing the eruption. Copyright of this picture belongs to Vodafone IS. Click on this picture for a full size.

Update: A meeting at University of Iceland tomorrow since it has been one year since the eruption in Eyjafjallajökull volcano.

Tomorrow from 17:00 to 19:00 UTC at Askja, room 132 and central space. Please see the pdf file for more information about this even. I was asked by a geologist working at University in Iceland to publish this here for anyone how is interested in going to this event.

Eyjafjallajökull one year on at University of Iceland
Click to read this pdf file.

Here are videos of the Fimmvörðuháls eruption in Eyjafjallajökull volcano that took place in 2010.

According to a news article in The Independent today. It appears that UK government was unprepared for a volcano eruption in Iceland that could send ash cloud in the direction of UK. Like that did happen in Eyjafjallajökull volcano eruption in the year 2010. But according to the same news the UK government dedicated to drop such plans from there risk assessments and planning in the year 2009. A whole year before the eruption in Eyjafjallajökull volcano took place.

This was most likely also the case in other countries in Europe where the ash cloud did come as a surprise to governments across Europe and they did appear to be unprepared for it when it halted all flights in Europe for almost a week.

The Icelandic news respective. Use Google Translate and expect world of mystery to happen. 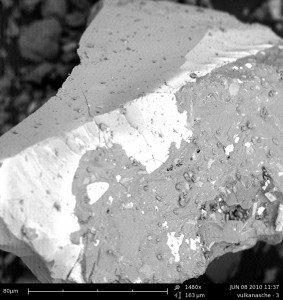 Over the last few hours it has been getting cold. The frost has been getting down to -10C and even colder in the higher areas. This has started a interesting events that takes place in Iceland (this might happen elsewhere too). But the events that take place here are frost earthquakes. This are not real earthquakes, but a event that the frost creates and are in fact false earthquakes. Most of them are too small and too poor in terms of quality to be located by the SIL network that Icelandic Met Office has. But when there is a sudden drop in temperature the frost earthquakes can appear on the SIL network, but with a extremely low quality. The driving force behind this earthquakes is water that is freezing in the ground and in rocks (cracks).

During the next 24 hours or so there is going to be a cold snap in Iceland with temperature going down to -20C in some areas, and even lower at glacier and higher areas. So we can expect a lot of frost earthquakes (false earthquakes) in that time. So the Icelandic Met Office maps might start to look interesting and with a lot of earthquakes in the next 24 hours.

The weather forecast in Iceland: Temperature

Iceland news about this. Use Google translate at own risk.

The night of the 6th of January 2011 had few earthquakes in the Eyjafjallajökull volcano. This minor earthquake activity has been reported by the Icelandic media this morning. The news on this is not a long one. But confirms that some of the earthquakes in Eyjafjallajökull volcano are real (but might be wrongly located by the automatic SIL system). In the same news it is claimed that icelandic geologist are not concerned about this minor earthquake activity in Eyjafjallajökli volcano. But none of the earthquakes that did happen tonight (on the 6th of January 2011) did get over the size of ML2.0.

The news on the earthquake activity in Eyjafjallajökli volcano. Use Google translate at own risk.