But Eyjafjallajökull volcano is not the only volcano making earthquakes. There are also earthquakes taking place in Grímsfjall volcano and in Esjufjöll volcano. The continues earthquake swarm in Krísuvík volcano. But this is the same that has been going on in previous weeks in that area.

There has been a lot of earthquakes in the Tjörnes Fracture Zone (TFZ). But the largest earthquakes in the last 24 hours did get the size ML3,0 according to the automatic SIL system that Icelandic Met Office runs. The size might be subject to a review later on.

But other then this it has been quiet in Iceland earthquake wise and volcano wise. But when the most frost was going on over Iceland there was a lot frost earthquakes taking place. But those events are false earthquakes and are due the fact that freezing water appears to crack the ground, sometimes with considerable force. The frost needed for this to happen has to be below -10C far as I understand.

I am going to take my Christmas break from 12:00 UTC on the 24th of December (2010) until the 27th of December (2010). While this break is on comments might be held longer in the moderation queue then normally. If anything major happens, I am going to post information about it when I can in this time. But unlike us humans nature doesn’t care about our days off. But I am hoping for a quiet Christmas in Iceland like everywhere else.

There is going to be special Christmas blog post tomorrow for all those Christmas greetings.

I have been viewing data on Krísuvík volcano and what has been happening recently. Out of this checking I have come to a conclusion that a eruption in Krísuvík volcano is going to place in immanent future. When that might happen is impossible to know for sure.

It is my un-professional opinion that when a eruption starts in Krísuvík volcano we are going to see something like that took place in Krafla volcano when it erupts. Not exactly like Krafla volcano but something along those lines in eruption style. But Krísuvík volcano is going to have Hawaiian type eruption style when it starts erupting. Unless the eruption takes place under water. Then a Surtseyjan style eruption takes place while a water can get into the crater.

Please note that this is a theory that I am working on. It might work out in part or in full. But then again it might be completely wrong and not work at all. If the second option is true, then I am going to start again and make a new idea on what is going on at Krísuvík volcano.

The earthquake at Arnarvatns highland. The earthquake wave clearly shows what type of crust it has been going trough. In this case a old crust that carries the wave well in my direction. I cannot tell what way the crust fractured in this case, as I need a minimal of three geophones to do so.

The Krísuvík earthquakes. This is actually a string of many earthquakes. When this happens the SIL system that IMO has major issues with locating the earthquakes. As the S wave often get absorbed by the next P wave that follows the next earthquakes. Sometimes however the waves get separated at some distance. That often helps to figure out how many earthquakes happened at the same minute. What is also interesting about this earthquake is the fact that it is “noisy”. But a normal earthquakes has a clear P wave and clear S wave. But on Reykjanes and Reykjanes Ridge there are often noisy earthquakes. I do not know why that happens and I don’t think the reasons for noisy earthquakes are not at all understood (far as I know anyway). 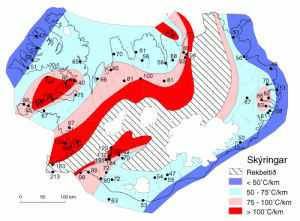 This map here shows how warm the hot water is in Iceland. Where I live the hot water is about 66C warm. It is a deep magma that warms the ground water up to this levels. There is a good article on this process at Wikipedia here.

Text updated at 17:15 UTC on the 11th of December 2010. Spelling error fixed and minor text changes.