END_OF_DOCUMENT_TOKEN_TO_BE_REPLACED

At 07:20 UTC today (6-November-2021) an earthquake with magnitude of Mw4,0 took place in Bárðarbunga volcano. A swarm of smaller earthquakes happened in the same area before and after the strongest earthquake.

I am having a bit of a hard November because I had to replace hardware in my computers. That has left me a little broke. Any donation would help with this situation. Thanks for the support. 🙂

After a long while of not writing about Bárðarbunga volcano it is now time for new article.

There has been a slow drop in earthquake activity during the last few months and it is unclear why that is. Eruptions in Bárðarbunga volcano can be as short apart in time as 18 years or less. The 1996 eruption in Gjálp fissure was from Bárðarbunga volcano, that places the time between eruptions 1996 and 2014 at 18 years.

During the night of 13-February 2021 an earthquake with magnitude of Mw4,0 took place at 02:30 UTC. This earthquake is normal and is because of inflation in Bárðarbunga volcano after the eruption ended in 2015. 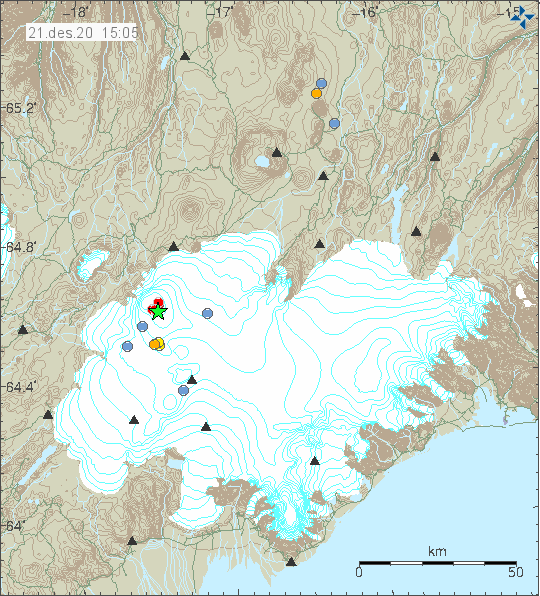 This earthquake had two earlier earthquakes with magnitude of Mw2,4 and Mw2,8. Smaller earthquake activity seems to have stopped or happening at slow rate at the writing of this article. Currently Bárðarbunga volcano has an earthquake with magnitude Mw3,0 to Mw5,0 every few weeks since end of the eruption in 2015. This pattern doesn’t seems to be changing.

It was reported in the news in Iceland few days ago that ground heat and hydrothermal activity in Bárðarbunga volcano is increasing and has been doing so for at least few months. Steam has been observed according to the news coming from one of the cauldron that is now in the rim of Bárðarbunga volcano caldera rim. It has also been observed that few areas that have been active for a long time are now expanding in size.

Current risk is large glacier floods from Bárðarbunga volcano as the heat is melting large amounts of glacier in this area and possible damage and danger from those glacier floods. This increase in ground heat suggests that magma is slowly pushing its way up in the caldera rim of Bárðarbunga volcano. It is not possible to know if this is the case in the caldera since that is full of glacier that is ~600 meters thick at the most deepest end. If it wasn’t for Vatnajökull glacier and the pressure it puts in Bárðarbunga volcano there would already be an eruption going on there today. It is only when the magma gets above the pressure of the glacier an eruption can happen and in the eruption of 2014 and 2015 that didn’t happen as the magma found a easier way out by forming a dyke that travelled ~46 km away from the main volcano before an eruption started. This option for the magma might be closed now since dyke like the that formed in 2014 and 2015 eruption normally only erupt once after the magma flow stops.

I am currently dealing with failing hard drives in my main computer and that makes it really slow. This might slow down my response until Friday when I finally get replacement hard drives. I also had hard drive problems with my main earthquake computer but that issue has been resolved with new hard drives. 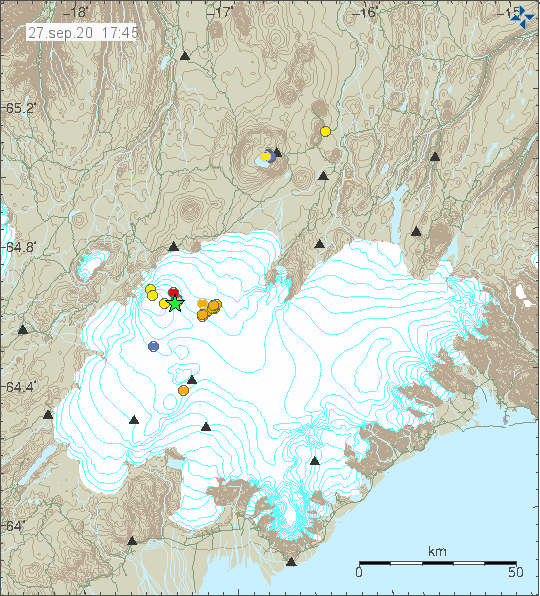 During the night (15-September-2020) an earthquake with magnitude of Mw3,1 took place in Hamarinn volcano (Loki-Fögrufjöll) (part of Bárðarbunga volcano). This earthquake is part of an activity that has been happening in this location for more than a week. It’s unclear what this activity means but it has been recorded that in 2011 few weeks before a minor eruption in volcano there was an increase in earthquake activity before the eruption took place. This earthquake activity is ongoing at the writing of this article. 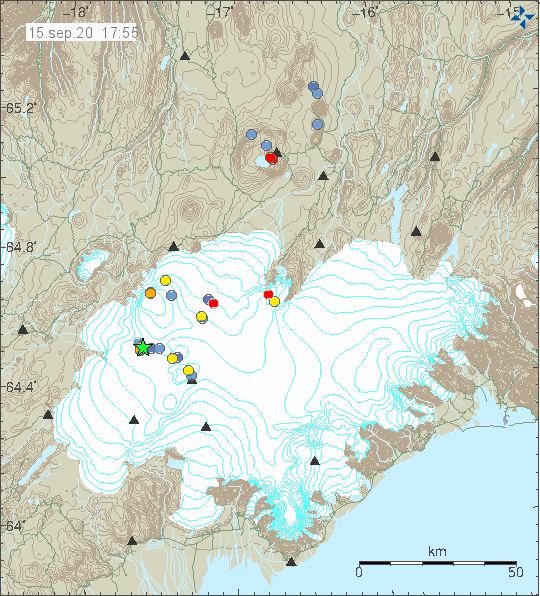 When this earthquake took place there was no change in harmonic tremor on nearby SIL stations. An eruption in Hamarinn volcano don’t seem to require a lot of earthquake activity before it starts. I don’t know why that is but that was the experience in the minor eruption in July 2011.

This article is a bit late because I didn’t have the energy to write it yesterday (14-July-2020). 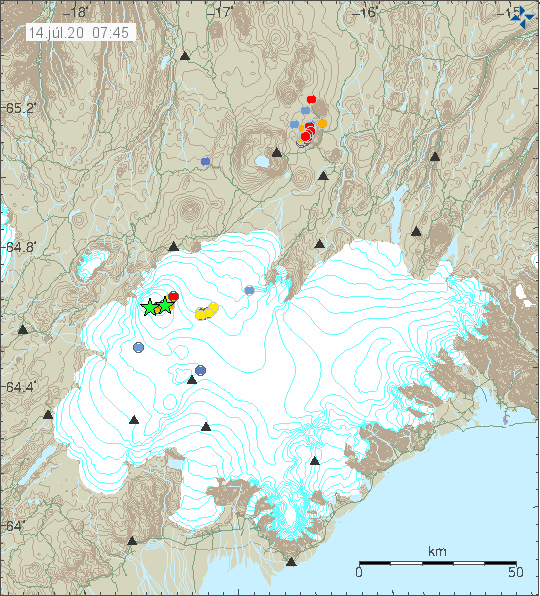 There were two aftershocks with magnitude of Mw2,5. Other earthquakes that happened were smaller in magnitude. This activity is normal now for Bárðarbunga volcano and no eruption is expected and would require a lot more earthquake activity as was seen during the 2014 August and September start of the eruption from Bárðarbunga volcano.