This is a short overview of the eruption that is now ongoing in Geldingadalur in Fagradalsfjall mountain area. This is part of Krýsuvík-Trölladyngja volcano system according to latest information. This information might change as the time and more information is collected. This article is written on 20-March-2021 at 02:58 UTC.

The eruption might only last for two to three days as it currently looks but that might change without warning since it is impossible to know for sure what is going to happen next with this eruption.

There are no good web cameras of this eruption since it is remote and started late on Friday night and the weather on Reykjanes peninsula is not good for today (20-March) or tomorrow (21-March).

Updated at 04:49 UTC. Web cameras added to this article.

This is a short article that because the situation can change without warning and article is written on 19-March-2021 at 21:07 UTC. There have been updates to names used and now Krýsuvík-Trölladyngja name is used by Global Volcanism Program and Icelandic Met Office. Suggesting that the magma that is about to erupt has its origin in Krýsuvík volcano system eat of current centre of activity. This sometimes happens in Iceland when magma travels long distances deep underground.

Today at 15:01 an earthquake took place with magnitude of Mw3,1. This earthquake has in my view clear signs of magma movement close to the surface as the depth of this earthquake was just 0,1 km (100 meter).

This earthquake strongly suggests that magma created it at shallow depth. It has not yet resulted in an eruption but it is a question if this the final sign before an eruption happens. The current quiet time might last up to 2 months but it is impossible to know for sure. 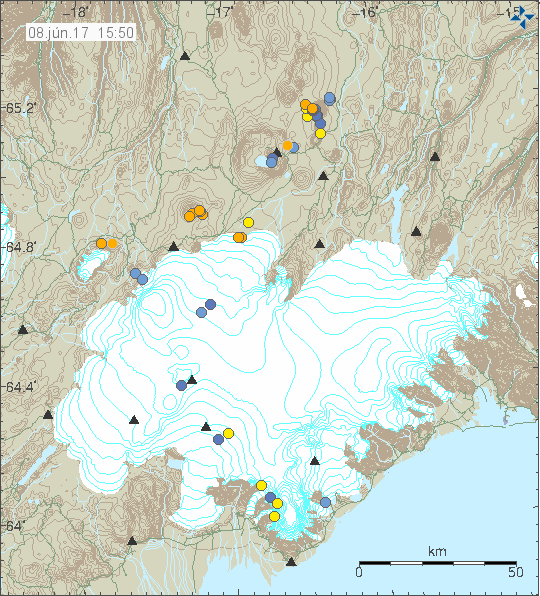 During the night of 15-November-2015 a swarm of deep earthquakes took place not far from Trölladyngja. The thing about Trölladyngja is directly connected to Bárðarbunga volcano and its eruption cycles. Trölladyngja it self was formed in a eruption in the year 5000 BCE, according to historical overview from Global Volcanism Program. According to some sources, Trölladyngja is a shield volcano, I don’t know if that is exactly correct. Regardless of what type of volcano Trölladyngja is, there is clearly something going on in it. Since this is not the first time I see earthquake swarm at this depth at this location. I doubt that this are stress related changes in the crust due the collapse of Bárðarbunga volcano caldera. 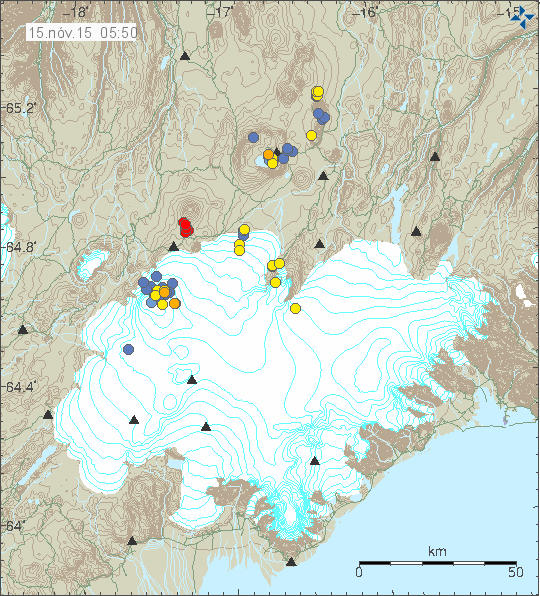 The earthquake activity in Trölladyngja (red dot). Image is from 05:50 UTC. Copyright of this image belongs to Iceland Met Office.

All of the earthquakes taking place were small, the largest had the magnitude of 1,1 and the depth was from 18 – 15 km.

In the early days of the earthquake swarm that started in Bárðarbunga in August-2014 a dyke intrusion pushed into this direction and than it just stopped as it lost the energy, or hit a obstacle that it was unable to break trough. 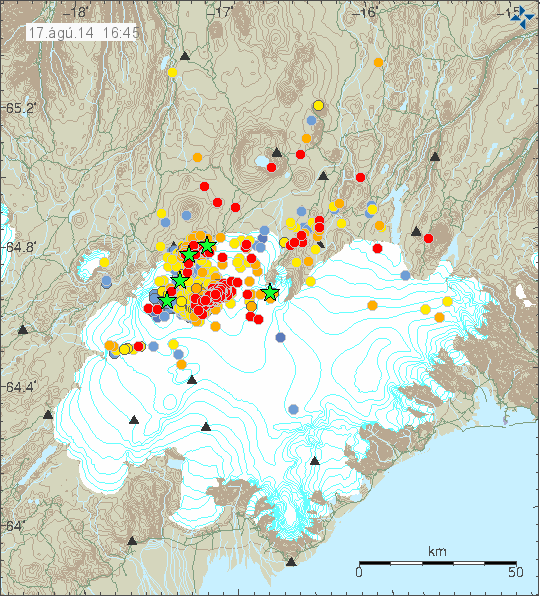 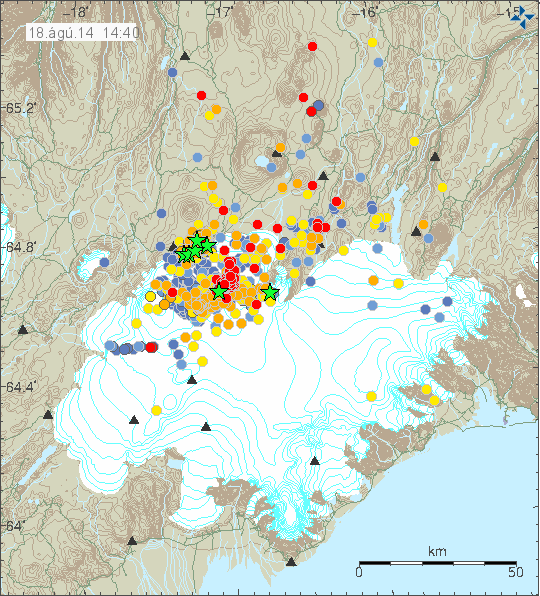 I don’t know yet what the chances are for an eruption at this location. More earthquake swarm activity is needed until the magma that is clearly down there breaks up. However the rifting that is taking place in this location might speed things up by unknown factor. This rifting might and possibly is allowing more magma entering this area deep underground without any earthquake activity. It is difficult to know what is going on at this location, so a lot of this is a speculation on what might happen. What actually happens in the end is a whole different thing and only time is going to tell us what happens next.