Yesterday (17-October-2020) at 22:02 UTC an earthquake with magnitude of Mw3,3 took place 3 km north-east of Húsavík town in the Flatey – Húsavík fault. This was followed by few minor earthquakes. This earthquake was felt in Húsavík but no damage was reported from it. 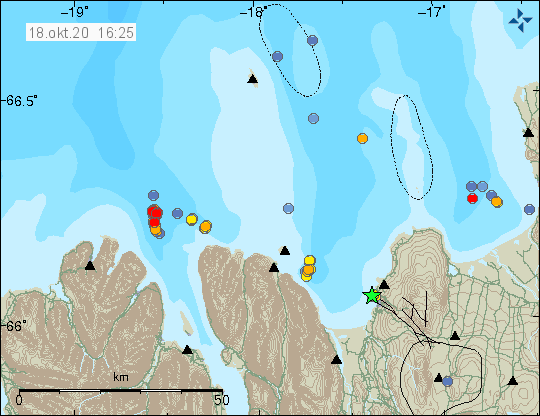 The earthquake activity close to Húsavík. Copyright of this image belongs to Icelandic Met Office.

This area of the Flatey – Húsavík fault has not seen any earthquake activity until now, even if there has been a strong earthquake swarm going on in nearby areas since June 2020 . There continues to be a risk of stronger earthquakes in Tjörnes Fracture Zone.

Earthquake activity that started in March 2017 in TFZ (Tjörnes Fracture Zone) is ongoing. I don’t know yet how many earthquakes have happened so far, but at last check Icelandic Met Office reported that the mark was at 800 and that was more then a month ago. The fluid that is pressuring up at this location between fault lines is most likely a magma in my view. If that results in a eruption is harder to say, at the moment the magma seems to be stuck at 10 km depth (in or around that depth). The current earthquake at Flatey in Skjálfanda fjord. The location is where the yellow and orange dots mix (slightly east of Eyjafjörður fjord). Copyright of this image belongs to Icelandic Met Office.

The earthquake activity at this location continues with little signs of stopping. What is also interesting is the fact the magma doesn’t seems to be making any progress up the crust at the moment. With fault line already in place the path to the surface is almost direct in this area if nothing is preventing the magma from moving upwards (impossible to know). At the moment this earthquake activity is limited to minor earthquakes and this magma seems to be lacking pressure to reach the surface at the moment. At this location there are no known volcanoes.

Please remember to support my work with donations. As it helps keeping me working on this website and paying the bills. Recent donations did exactly that and that is a big support. Thanks for the support. 🙂 Flatey in Skjálfandi earthquake activity since March-2017. Copyright of this image belongs to Icelandic Met Office.

There are two faults at work here, the first one is in north direction and close to vertical. The other is in the direction of NW-SW (around 145 degrees east) and has an angle of 60 – 70 degrees. Depth is around 10,5 to 11,5 km. Since March, according to Icelandic Met Office report the earthquake activity has slightly migrated north. As the earthquake activity has moved north, they have moved upward to a slightly shallower depth. The NW-SW fault plane in the earthquake swarm north-east of Flatley in Skjálfanda. Copyright of this image belongs to Icelandic Met Office. The fault plane that is almost directly north and vertical. Copyright of this image belongs to Icelandic Met Office.

Number of earthquakes north-east of Flatey in Skjálfandi since Marc-2017 until June-2017. Copyright of this image belongs to Icelandic Met Office.