During the night of 26-September-2020 the earthquake swarm that has been going on east of Grímsey island in area called Nafir increased. Total of six earthquakes with magnitude above Mw3,0 took place during the night and the largest earthquakes had a magnitude of Mw4,3. This area has a volcano that is unnamed but often called Nafir. There is no Global Volcanism Program profile on this and last eruption in this volcano is unknown. The largest earthquakes where felt in Grímsey island and other nearby populated areas. According to Icelandic news people of Grímsey island are tired of the constant earthquake activity that has been going on in Tjörnes Fracture Zone since 19th June 2020. 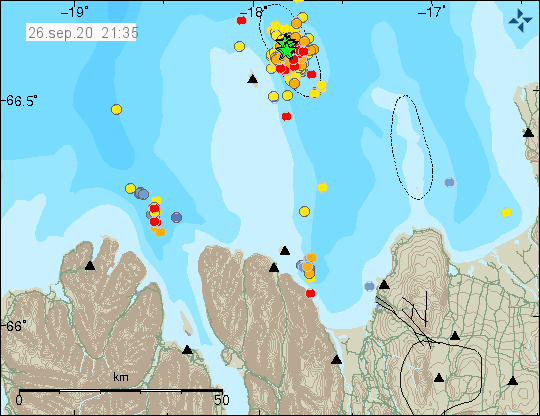 The earthquake activity east of Grímsey island in Nafir volcano. Copyright of this image belongs to Icelandic Met Office.

In February 2018 a magnitude Mw5,2 earthquake took place in this location. There are no sign that an eruption is about to happen with this volcano but that is difficult to be sure about. All this earthquake activity currently seems to be tectonic in nature as it is happening in a rift valley in this location. Magma movement and any eruption is going to appear clearly on Grímsey SIL station and other nearby SIL stations in north Iceland. More earthquake activity is expected in this area and current earthquake swarm is ongoing at the writing of this article.

Please remember to support my work with donations or by using Amazon banners on my website. Thanks for the support. 🙂